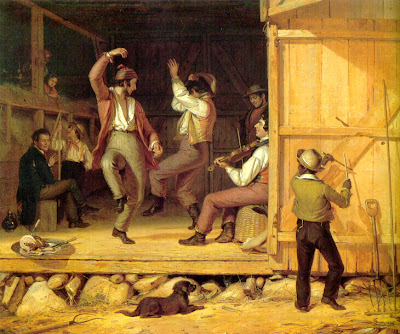 Of course, as would be appropriate at that time and place, he is outside the barn, not quite a part of the instrumental ensemble socially; but he is part of it musically. Mount painted music in his community on Long Island, New York. He was, himself, a fiddler and a tune collector and transcriber as well as a painter. He invented a cornerless fiddle that he called "The Cradle of Harmony," but he made his living as a painter, chiefly from portraits that were commissioned by patrons who could afford them. Among his genre paintings were about a dozen non-commissioned canvases depicting fiddlers, banjo players, and dance music. Most found buyers. His brother Robert was a fiddler and dancing master who traveled and instructed dance classes in the South.
While it is appropriate to give any artist license to paint from an inner vision, and not to take quite literally the representations that they make, however realistic they seem, in the case of Mount's music paintings there seems little reason not to take them as accurate renderings of the music in his community, though to be sure they are overlaid with sentimentality. It is hard to believe, for instance, that the little dog in the foreground would not be tearing into the carcass of the bird on the plate at the edge of the barn. But the musicians seem to have been real. In fact, the names of most of the musicians depicted in Mount's paintings are coming to light. They were local musicians that Mount saw and heard frequently. Some, like the fiddler depicted in Mount's painting "Just in Tune," he knew intimately: the model was his brother Robert. I told the audience that my musicologist colleague Chris Smith has been researching this and other aspects of Mount's work and is preparing a book discussing Mount and the evidence that these paintings and sketches provide for this musical interchange, and its sociocultural implications; and that it will surely be an eye-opening work of scholarship. Interestingly, because the Mount paintings of Black and white fiddlers and banjo players have been familiar to me for so many years, I had neglected to anticipate that they might be unfamiliar to this conference audience, even though many were doing research in American music. Indeed, they were unfamiliar; but the group of graduate students and professors were quite taken with them. If that is any indication of the potential audience for Chris Smith’s book, it will be even more appealing and important.
Finally, I spoke about the banjo as a mediating instrument in the performance of old-time string band music, and I took up a subject that I’ve been fussing with for many years: how an old-time string band musician (in this case, a banjo player) learns to play a tune by ear as it’s being played, over and over again, a tune that he or she has never heard before. I am particularly interested in how the tune appears in the mind and in the fingers, how it is presented to the musician’s consciousness successively, each time it flies by, so to speak. To use a technical term, this is a phenomenological inquiry. As I’ve been trying to write an essay on this subject (and trying to use evidence not only from introspection based on my own playing, but also from others’ testimony as how the tunes appear to their consciousness—and not everyone reports this to be the same) for a number of years, I’m going to have to leave it at that, here.
I concluded the keynote address on the banjo as a mediator by emphasizing the creative aspects of learning to “set” a tune (either on banjo or fiddle) by ear, a tune that one has not heard before, in real time; and I tried to indicate that the pleasure and the craft satisfaction found in doing it well (or reasonably so) is sufficient to make this way of making music fill a large part one’s musical life, sustaining both oneself as a musician and in the process sustaining a musical tradition. It is not an easy skill to learn, by the way; it may take several years, and it is particularly difficult on the banjo, because it is not possible to render the fiddler’s melody exactly as the fiddler plays it, at least not without sacrificing the rhythmic drive and swing that is the making of this old Southern sound; and so the banjo player must create a melodic setting that is complementary to that of the fiddle. These skills are not the same as those that improvising jazz musicians develop, by the way, although they are related; but that is yet another story which must be left for another time.
After this keynote the audience engaged me in conversation about it for more than an hour. They were chiefly interested in the Mount paintings and what they might mean. I was happy to discuss that, and reminded them of Chris Smith's forthcoming book. I tried to steer the conversation back to music and sustainability when I could, emphasizing the Black-white interchange as an instance of the ways innovation gives life and sustains music while transforming sound and enhancing its bodily experience. We adjourned to a delicious and appropriate pot-luck dinner at folklorist and professor John McDowell's home in Bloomington, where the conversation continued for a few more hours before, exhausted from my flight from Providence that morning and my endeavors that afternoon, I left the gathering for the motel and a sound sleep.