Plantations, Blues, and a Trump Hotel in Cleveland 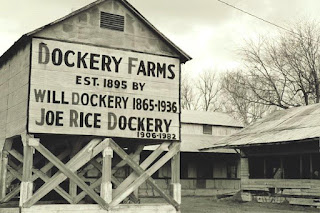 Blues tourism in Memphis and the Mississippi Delta has been around since at least the 1970s, but it’s been a niche industry because blues fandom peaked in the 1960s and despite occasional mini-boomlets since, it has never been the same. Even the interest in blues that followed The Blues Brothers (1980) film was short-lived. But now a new pair of blues brothers are bidding to make blues tourism big-league: Donald Trump, Jr., and his brother Eric are planning to fund a Trump hotel in Cleveland—that’s Cleveland, Mississippi, not Ohio. For it was in Drew, near Cleveland, Mississippi, that Charley Patton, considered the “father” of the Delta Blues, lived on Dockery’s Plantation where he sang and played blues. It was there that Robert Johnson hung out with Patton and his friends and, supposedly, learned to sing and play blues (although there are accounts of his having learned from Satan after meeting him at a crossroads). It was Johnson who along with Howlin’ Wolf (who also lived in the area) and played with Patton, influenced the post-WW2 Chicago blues sound that, again supposedly, became the basis for rhythm ’n’ blues and rock and roll in the 1950s. All of this is arguable, except for Patton’s home base in Drew, seven miles from Cleveland. And the fact that a Grammy Museum opened in Cleveland last year highlights blues history. (There is another Grammy Museum in Los Angeles.)
The Trumps are reportedly partnering with the family of Suresh Chawla, Indian-American immigrants and hotel entrepreneurs, to build the hotel that would bear the Trump imprimatur and, presumably, lure tourists coming not only for blues but also for the Trump name. Suresh Chawla gave $50,000 to the Trump campaign and pitched the hotel at a Trump fund-raiser in Jackson, Mississippi in August of 2016. A story that ran last week in the Washington Post offered the outlines of the deal, but there were earlier reports about it last June. The trump-branded hotel will also boast a meeting hall built to resemble a cotton gin and, at the suggestion of the Trump family, a mansion made to look like an antebellum (i.e., pre-Civil War) southern plantation. In the wake of controversies surrounding removal of Confederate monuments built during the Jim Crow era, erecting an antebellum plantation in a town attempting to attract blues tourists strikes a doubly wrong note.
Antebellum plantations, after all, were the apotheoses of slavery. The wealthiest slaveowners lived in them, the ones that held the most African American slaves as property, in bondage, subject to torture if they didn’t labor hard to grow cotton and other crops, and maintain the life style of the plantation owner family. One of the mansions’ defining features were exterior columns in Greek Revival style, and no doubt the Trump mansion will boast these as well. As a four-star hotel, it will charge several hundred dollars per night for a visitor to stay there. Surely some of the workers in the hotel will be African Americans, descendants of slaves, as are the majority of laborers in the Delta today still. Yet it was out of slavery and its aftermath that their ancestors sang of freedom, in the spirituals and the blues. Erecting a symbol of slavery, torture, and the Confederacy in the heartland of the Delta blues is more than cheeky. But then Trump campaigned on bringing "the torture" back to the fight against terrorism.
Some people, sympathetic to the long-lasting economic problems and poverty in the Delta, are willing (as Robert Johnson is said to have done) to strike a deal with the devil. In moments of desperation and hunger, people are willing to accept presumed solutions, no matter the cost in symbolism and historical irony. But would such a hotel enrich the region very much? Certainly it would enrich the investors, if it succeeded; and it would further swell the coffers of the President’s family, of which he is a member even though he is temporarily out of the real estate business. Whether it would bring much prosperity to the region’s population is questionable. A few local businessmen would reap the benefit of tourist dollars, to be sure; but would there be a significant increase in jobs? And because the original investment will be huuuge, it will enrich the banks (perhaps Russian banks?) until the loans are paid off. Blues tourism isn't a big business, and never has been; and Cleveland itself doesn’t have much to offer in the way of blues history or venues other than the new museum. 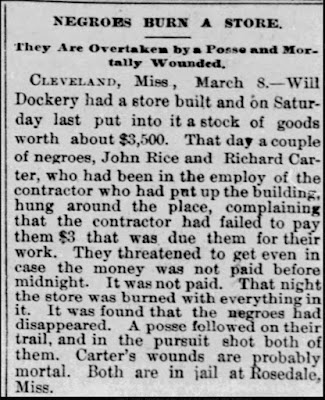 To add to the irony, the word “plantation” (to describe the place where a wealthy family lived to command a considerable agricultural operation) remained in common parlance in the post-bellum, Jim Crow Delta and elsewhere in the South. Dockery’s Plantation was an agricultural empire with dozens of African American sharecropper families living on its property. It was so vast and powerful that it issued its own scrip, or money. It also controlled the local police and the courts. Someone who ran afoul of the law risked disappearance, murder, and burial in an unmarked grave. As Lightnin’ Hopkins sang in "Tim Moore's Farm," putting the words in the mouth of a plantation boss, “Stay out of the graveyard and I’ll keep you from the pen[itentiary].” The sharecroppers lived in shacks not much different from antebellum slave quarters. It is unlikely that the Trump hotel will reproduce these. Dockery’s itself has turned into a blues tourist attraction and museum. Yet in nearby Clarksdale, Mississippi, there is reproduction of a post-bellum plantation complete with sharecropper shacks: the Hopson Plantation.
This is an attempt at an authentic reproduction, with interpretation detailing the operation of a post-bellum cotton plantation in the Delta. We may hope that at least a few of the tourists who visit the Trump hotel in Cleveland will visit Dockery’s and the Hopson Plantation to find out a little about the conditions that spawned the Delta blues, not to mention the connections with rhythm ’n’ blues and rock ’n’ roll, and then think about what all this architecture represents.