I used to think birds of the same species were genetically programmed to sing the same song. And so when I began listening carefully to bird song, I was surprised to find slight variations. I assumed these were accidental, the result of a bird's genetic defects or my inexperience in listening. Curious, I began reading what the ornithologists had to say about it. It turns out that, on the contrary, some young male birds must "learn" their species song from their elders. And very occasionally one does not get it quite right--and when that happens, the offspring may learn that slightly different melody.

Today on my walk in the woods, after three days of heavy rain, I heard a bird singing three of the five notes of the black-throated green warbler's song--the first, second, and fourth only. I concluded that it must be a youngster learning his song. Within a half-mile radius, a couple of other adult birds of that same species were singing all five, so it won't be long before this youngster likely has it right.

But one of the consequences of birds having to learn their songs is that songs of the same species may vary a bit, according to geographical region. The black-throated green warbler's five-note song on this island in East Penobscot Bay, where I spend time when not teaching at Brown or traveling, is typical for Maine. But black-throated green warblers who take up their spring and summer residences outside this region of northern New England sometimes feature a four-note song--that is, only four of the five heard around here. And some have a six-note song, even here.

Novice bird watchers often have difficulty recognizing songbirds by sight--they are small, shy, and do not care to be close to humans. Moving targets, they are not easy to bring up close with binoculars until the novice has practiced with them. In the spring and summer when they are singing, mating, and nest-building they are easier to recognize by sound than sight. Besides, anyone with an interest in the soundscape will pay attention to bird song.

About fifteen years ago I made tape recordings of bird songs on the island where I spend time when not teaching at Brown or traveling. In hopes of identifying them, I compared my recordings to the standard ones on CDs from the Audubon Society and other authoritative sources. But some of the identifications were difficult or impossible, due, I realized, to differences in regional bird song dialects.

To proceed, I needed to find recordings of the birdsong dialects I was hearing. After some searching, I found that Donald Borror (1907-1988), of the Ohio State University, made the recordings that most closely matched the bird songs I was hearing in Maine, and for an obvious reason: he recorded them in Maine. (A brief and informative biography of this bioacoustics pioneer may be found at http://elibrary.unm.edu/sora/Auk/v106n02/p0321-p0323.pdf). 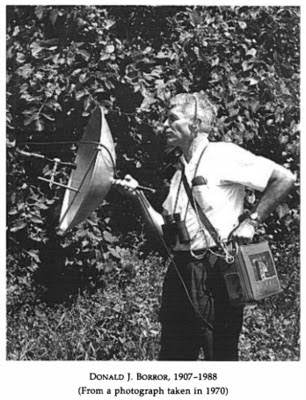 Borror used a top-of-the-line Nagra reel to reel tape machine with a very sensitive microphone inside of a parabolic cone. (He was also a pioneer in recording techniques.) As a result, his recordings are technically excellent even by today's digital standards. Some of his recordings were issued on LPs in the 1960s, with his commentary aimed at bird watchers interested in identifying birds and bird behavior by sounds. Dover Publications reissued them as cassettes, in the early 1970s, with lengthy accompanying booklets. Borror understood about song dialects and on these recordings aimed at the general public he was careful to say where he made each recording. Today, thousands of Borror's recordings are available for listening on the Ohio State website at http://drc.ohiolink.edu/handle/2374.OX/30658 but this huge database is useful primarily for the scientist and advanced birder wanting to compare songs from the same species according to geographic area and over a forty-year time period. There are, for example, more than fifty separate recordings in the database for the black-throated green warbler.

Interestingly, Borror also released an LP (Bird Song and Bird Behavior), later reissued by Dover on cassette, which took up various topics of interest to anyone curious about bird song, including how to make recordings of bird songs (and the problems in doing so), classifying bird sounds, types of songs, singing habits, song development in a particular bird, geographic variation in songs, duet singing, differences between songs and calls, making sound spectrograms of bird songs, and so forth. Borror's biographer, his colleague Sandra Gaunt, wrote that he "was a private and retiring person. He preferred to spend his time in the field collecting or in the laboratory organizing, analyzing, and describing his collection."

Like Thoreau, Borror observed natural sounds by returning seasonally to the very same locations, year after year. Like a bird, Borror migrated annually from southern Ohio to the state of Maine, recording in both places. Gaunt writes, "I once asked Borror if he did not wish that he had traveled more broadly in his years of collecting. He allowed that his participation in the Pacific Theater [in World War II] was all the world travel he cared to experience and, more seriously, that there was more than enough to document at home." Emerson criticized Thoreau for staying close to his home in Concord, Massachusetts most of his life. Thoreau fashioned his reply: "I have traveled much in Concord." Indeed, Thoreau walked every afternoon (and on moonlit nights) to observe the changes in the natural world and, occasionally, his neighbors. Ecologists, of course, study small area ecosystems intensively today. Gaunt concluded, "For many of [Borror's] locations he obtained recordings of many species for nearly 40 consecutive years. These repeated samples supported the research effort of one man, and today they are a valuable, if not unique, resource for future studies, especially studies of song pattern variation in time."

Bird song presents an interesting contrast with music; that is, with music as humanly organized sound. We have no problem calling bird vocalizations "song" even though they do not meet the scientific criteria for music. Nor do they meet the criteria for language, because they lack language's recursive qualities. Music composers throughout history and in many different cultures have been inspired by the melodies of bird song, sometimes directly imitating it, and sometimes transforming it. One ethnomusicologist, Steve Feld, wrote a book about the complex cultural ramifications of the belief, among the Kaluli people of Papua New Guinea, that bird song is a signal from departed ancestors.

What are the songs of birds telling us about sound and communication, the uses of sound as signal (territory, mood, danger, location, etc.)? What do they tell us about sound and place, about sound and movement, about the ecology of the acoustic niche? And finally, what can we learn from birds about music, sound, and sustainability? Thoreau and Borror both were struck by the seasonal, the calendrical, the cyclical repetitions of bird song and sound in the natural world. Thoreau's last great (and unfinished) project was his cyclical "Kalendar" of the seasonally changing natural world around Concord; his journal observations were made to that end, as were Borror's recordings--longitudinal studies, intensively rather than extensively, of sound and sustainability, by traveling in place.

Posted by Jeff Todd Titon at 11:20 PM No comments:

In November, 2010, I wrote three entries in this blog about the future of classical music on US radio. WGBH-FM, Boston's premier classical music station since 1951, had nearly a year earlier acquired the other Boston classical music radio station, WCRB-FM, and decided to switch the flagship station to a mostly talk-show and news format. In the year and a half that followed, an increasing number of public radio stations, ones that once played classical music for at least part of the day, have gone over to news, opinion, and information, sometimes making classical music (chiefly the warhorses) available 24/7 on radio channels that require the Internet or special receivers.

Seldom, if ever, have public radio stations justified these decisions in front of the public. Classical music on radio goes (away) without saying. And so the May 3 announcement, on the public broadcasting blog "Current.com," is of interest not only because it offers a rationale but also insight into today's public radio climate. I quote from the entry: "WUIS, a public radio station operated by the University of Illinois Springfield, will transition from classical to news and talk in July, reports the Illinois Times. The shift follows the retirement of Karl Scroggin at the end of March, who had hosted the weekday Classics since 1984. The station has already started streaming a 24-hour classical digital channel with live announcers. 'We recognize classical radio is one of those things that's slowly going away, but we're still willing to make an effort to get it to people who want it,'" General Manager Bill Wheelhouse said. [Italics are mine. The quotation is from Current.org, May 3, 2012.]

"Slowly going away." Fade to black. Belief in the inevitability of this departure must be shared by most pubradio (as it's called in the trade) managers--that classical music has become a niche market, no longer popular with the majority of listeners. One might argue that because so much different music, and in such quantity as never before, is available today on the Internet, for streaming and download, all genres, not only classical, have become niche musics. At the same time the number of pubradio programs available to stations by subscription has also increased enormously--and these are chiefly talk and information shows, not music.

Nowadays pubradio stations rely more and more on local and regional fundraising from members and business underwriters. Surveys reveal that talk radio attracts more listeners than classical music programming; more listeners supposedly translates to more members, or at least to an argument (made to legislative bodies that still fund pubradio) that the taxpaying public is being served. Classical radio isn't "slowly going away" of its own accord; pubradio programmers are squeezing it out in favor of talk, opinions, points of view. Everybody has one, today--and talk radio is there to air the chatter.

The decline of classical music programming on pubradio signals a cultural shift; cultural in the Arnoldian sense as well as the anthropological. People of a certain age will recall that in its earliest days, public television was called "educational televison." Public radio also was meant to have an educational purpose, and because the consensus among educators in the twentieth century was that classical music was the music of the highest quality, it followed that music programming on pubradio should emphasize it, just as the news programming on public television and radio was meant for a well-educated audience.

Classical music on radio, then, reflected the kind of highbrow cultural uplift characteristic of the rising middle classes in the second half of the twentieth century. A person of that rising class subscribed to symphony orchestra concerts and attended opera as well as musical theatre; a person of that class read The New York Times and the better novels that were reviewed there, perhaps through a book club. A family of that class made certain that their children were exposed to classical music: piano or violin lessons, most likely, along with Young People's Concerts.

It is no coincidence that with the decline of the American middle class--the idea of a rising middle in today's "developed" economies is laughable; it is, rather, a rapidly falling middle--classical music's future on US radio (as elsewhere) is unsustainable in its present form. It is that economic reality, a decline in the patron class, coupled with the media availability of so much "other music" to interest people with eclectic taste, that accounts in large part for the cultural shift that causes pubradio program managers to say "We recognize that classical radio is one of those things that's slowly going away..."
Posted by Jeff Todd Titon at 12:25 AM 2 comments: