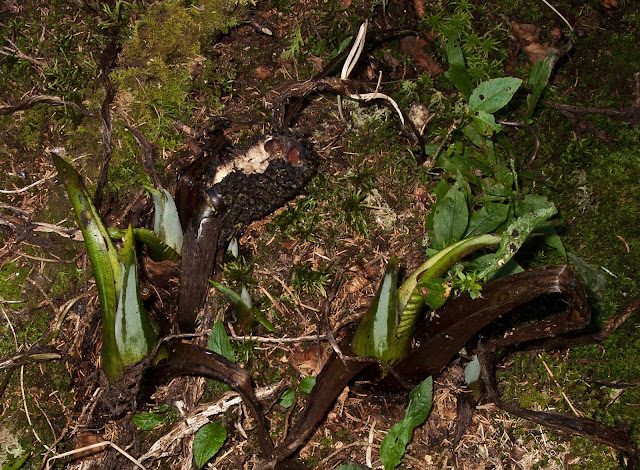 The photo at the beginning of this entry shows new growth of skunk cabbages arising from roots in the fall as the old spring growth decays. The new, green spaeths and decaying, blackened spadices are apparent. Click on the photo to enlarge it for better viewing. Photograph by Jeff Todd Titon, East Penobscot Bay, September, 2012.
Posted by Jeff Todd Titon at 10:11 PM 2 comments:

A Sound Commons for All Living Beings

Human beings should attempt to manage the soundscape as a sound commons to permit all creatures to communicate with one another in their acoustic niches. That is my thesis, but it requires elaborating and defending. Besides, these questions regarding the sound environment are part of a larger public discourse concerning whether and how to manage the natural environment, a discourse that historically has been bound up with economics in a variety of important ways. Recall that ecology and economics come from the same Greek root, oikos, meaning household.
Elaborating this argument requires discussion of several concepts and resolution of a number of questions and objections. For example, while the law recognizes that you and I can own and exchange the fruits of our labor, whether goods or ideas, what sense can it possibly make to say that the chickadees that visit your bird feeder own their songs? Yet without song they could not signal one another and without communication they could not live. Commons, animal communication, soundscape, sound-world, acoustic niche, sound interference, biophony, geophony, anthrophony, soundscape ecology, property, cultural, intellectual, and natural property rights, ownership, stewardship, commodification, exchange, biodiversity, deep ecology, exploitation, regulation, management, wilderness, resources, set-asides, non-use—these are only some of the concepts that need to be explored and put into relation. In addition, of course, as the subject of this blog is music and sustainability, it’s important to locate the place of music (humanly organized sound) in soundscapes and sound-worlds.
Among the questions and objections to a sound commons for all living beings are these: Must a commons be regarded as a resource to be used, propertized, regulated and, eventually, commodified? If “nature” is unknowable to us except through historically changing human constructions of it, is there a verifiably true basis for claiming a relationship between sound, communication, biodiversity, and a resilient planet? And why are all creatures, not just humans, entitled to their acoustic spaces, bats and snakes and locusts as well as you and I? In such a case, what would it mean to model management of the sound commons on nature’s economy? And why have any confidence in human ability to manage at all, when humans have gotten us into this predicament in the first place? I’ve been exploring many of these concepts and questions in this blog since 2008, and now it is time to run a bit of order through them and place them in relation to make the larger argument.
In my previous entry I suggested that while the acoustic ecology movement’s efforts to eliminate noise pollution from the soundscape were laudable, the human-centeredness of this approach was too narrow. Those of us who exclaim “I can’t hear myself think!” are responding to sound pollution. But noise interference affects all creatures who communicate using sound, whether humans, whales, or spadefoot toads. Communication is basic to life, but like many other aspects of the environment it is under threat, chiefly from human activity. The helicopter noise impacts communication among caribou which in turn impacts the Innu way of life. A more dramatic example of interdependence among all living creatures would be difficult to find. Developing this argument will not be simple, but summary of the argument is clear enough: human beings should do what we can to manage, not damage, the soundscape, and do so to enable all creatures, not just humans, to communicate in their acoustic niches. If we are able to do so, the music of all living beings will flourish, and sound communication will contribute to sustaining a healthy, biodiverse planet.
Posted by Jeff Todd Titon at 2:52 PM No comments:

In my previous blog entry I suggested that it is helpful to think of the acoustic environment as a sound commons. The usual example of a commons is land that members of an agricultural community use for grazing livestock. New England towns traditionally set aside a plot of land that was called the “town common”; these still exist in some towns, such as Amherst, Massachusetts, very close to my alma mater, Amherst College. Of course, the citizens of Amherst don’t graze their sheep and cattle on the town common anymore; it’s a park, and it’s used for public events. English peasants farmed on commons land until villages were transformed by enclosures (private property), a gradual process that took place mainly in the 1700s. In highland parts of Europe, and also in North America, livestock were let more or less loose to graze and feed on mountain land in season, sometimes with shepherds, sometimes without. Deep water ocean (for fishing) is another example of a commons. In a commons, then, members of a group share a particular resource, and the people who use it assert that they have rights, or entitlements, to do so. 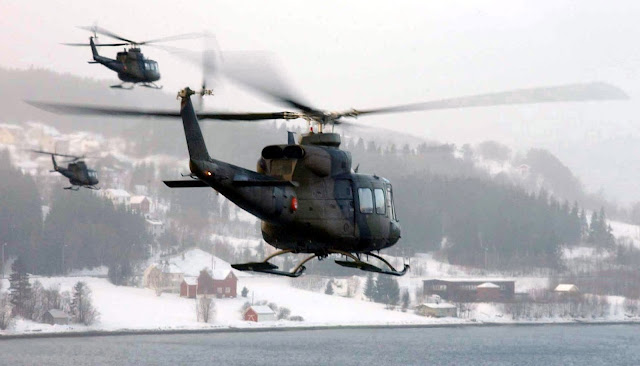 A new sound has come to the George River in Labrador, northern Canada, where the Innu traditionally relied on hunting caribou for food and clothing. It is the sound of helicopters flying through the air bringing in engineers and prospectors exploring the area for minerals. According to George Rich, an Innu elder, “the sound of the choppers really is a devastating sound because they [the caribou] don’t know where to look, all these choppers are going flying all over the place.” The result is a declining herd and a changed migration route, away from the traditional hunting grounds. “One of the mineral exploration companies is trying to build a road right in the heart of our territory. Right in the heart of [caribou] calving grounds,” Rich said.(1)
One thing leads to another as an intrusive new sound threatens what is left of a way of life. Besides their importance for diet and clothing, caribou “is our identity,” Rich said when interviewed recently for a radio broadcast. “It’s our culture, it’s our way of life. It’s also a part of the big spiritual awareness of what’s going on in the animal world. And without the caribou we don’t think the Innu will be able to survive.” The Innu are so isolated in their northern fastness that without as many caribou they are getting food shipped to them in the summer when the waters are open, or flown in to them in winter. “And then that’s created a lot of problems in diet and eating junk food. . . . A diabetes epidemic is one of the things that we are facing right now,” Rich concluded.
There are 850 Innu living in a village 150 miles north of Goosebay, Labrador. They were not always villagers. Until about fifty years ago Innu were nomads, living in camps and following the migration routes of the caribou. The caribou herd, then estimated to have numbered as many as 900,000, has declined to less than 28,000. Of course, the sound of helicopters and road construction isn’t the only thing affecting the caribou. Global warming is doing its part. Caribou bear their calves in cool weather, and they forage for food beneath the powdery tundra snow. The warmer weather brings black flies, makes it more difficult to calve, and covers the ground with rain that freezes to ice and prevents browsing. And the Innu way of life underwent profound change when they were forced to settle in villages. But they still hunt caribou, though now subject to Canadian law which forbids them to hunt in certain places and at certain times. When they violate the law--as they sometimes do--they are subject to arrest.
But for George Rich, it was the noise pollution from the choppers that most clearly--and most recently--affected the herd. We are not used to thinking in terms of sound-worlds when we measure the environmental effects of development. We usually limit our gaze to the visible landscape: forests cleared for timber use, farmland covered with factories and shopping centers. Sound? It seems so ephemeral. The warnings coming from acoustic ecologists about noise pollution in urban environments seem trivial by comparison. But are they? It isn’t just that sirens and jackhammers are deafening; they cause anxiety and confusion in humans as they do in caribou.
Not unexpectedly, the Innu have music about the caribou, hunting songs that were passed from one generation to the next. What would a hunting song be about? The strength and prowess of the hunter? A boast or a threat to the prey? A triumphant enactment of the kill? None of the above. Instead, they establish relationships with the caribou. George Rich translated one of them: “You are so far away, I cannot reach you. I’ll catch up with you and call my friends.” This is how music evokes, and shapes, the “big spiritual awareness of what’s going on in the animal world,” as Rich put it. The music of the Innu is not only a critical part of the Innu sound-world, but it embodies Innu worldview.
“I do hope the caribou come back soon,” the radio host said, somewhat lamely, in ending the interview with George Rich. Rich could not help but agree. They were hoping for resiliency. Beyond hope, though, we might try management: get those helicopters out of there, stop building the road, stop exploring for minerals, and understand that the effects of climate change will be felt not only by vulnerable peoples in remote areas but by every creature everywhere on the planet. Music, sound, nature, culture: again, it’s all connected. A sound-world is not simply an acoustic environment, a container for music and noise. Incidents such as this one with the caribou among the Innu show how a sound-world is a common-wealth, a commons shared by all. Managing the sound commons starts with understanding its nature and significance.

(1). George Rich, interviewed by Steve Curwood. “Reindeer Populations in Decline,” Living On Earth, aired during the week of Dec. 7, 2012. Accessed at http://www.loe.org/shows/segments.html?programID=12-P13-00049&segmentID=4
Posted by Jeff Todd Titon at 9:43 PM No comments: