In response to a request that I give them a title and brief description of my lecture for the sustainability unbound event at the University of New Hampshire in late March, I settled on the following:

Henry David Thoreau’s ear vibrated in resonance with the sounds of crickets, frogs, birds, air, water, and especially to his beloved aeolian telegraph-harp, convincing him that humans were part and parcel of the natural world, not set above it to master its resources for the progress of civilization. Thoreau’s experiences with music and sound, which he called a “language without metaphor,” enabled him both to enjoy ecstatic experiences of the natural sublime, and to look for relations within the natural world rather than to regard natural facts primarily as metaphorical vehicles for transcendence into the realm of spiritual truths. As both humanist and naturalist, his sound combination of ecstasy and ecology led him not only to a peculiarly modern understanding of nature but convinced him that 'in wildness is the preservation of the world.' Contemporary scientific research in acoustic ecology bears him out.

This is just a surface view of the topic. I'm grateful for the push that this event has given me to re-read Thoreau on music and sound and to connect his thought to a humanities tradition. There has been a great deal of stimulating writing about Thoreau in the last couple of decades, and even before then he was well served by literary critics such as Sherman Paul and Sharon Cameron. With the rise of ecocriticism, his writing has become even more important to contemporary culture. A few of the critics have commented on his references to sound and music--those references are hard to ignore--but they have followed Sherman Paul's lead in assuming that sound, for Thoreau, confirmed his belief in a correspondence theory of truth that was articulated by Emerson (in his book Nature) and was characteristic of transcendental thought, although correspondence theory certainly did not originate with the Emerson or the American transcendentalists. I'm not so sure that this reading has got the all of it. Thoreau did think at times of sound as metaphor; but constructing sound as metaphor and symbol removes its temporal aspect, its passage in time--it instantiates time. He could (and did) also think of sound as immanent rather than transcendent; and increasingly it led him to search for pattern through the passage of calendrical time, as he worked on his last project, his "Kalendar" of the natural world of Concord. His writings contain the evidence.
Posted by Jeff Todd Titon at 4:41 PM No comments:

The March "sustainability unbound" symposium on sustainability and the humanities, at the University of New Hampshire. has been on my mind for several weeks now. Planning my lecture, I've been thinking on what a humanities perspective might contribute to the discourse on sustainability. I don't mean to reference the interpretive turn in the fieldwork-based disciplines of ethnomusicology, folklore, and cultural anthropology, but a more traditional notion of humanities as a history of ideas concerning the human condition and the good life for individuals and communities. And this has led me back to the life and writings of Henry David Thoreau, a canonical author both in the literature of the humanities and of the environmental movement. I've noted in earlier blog entries Thoreau’s uncanny ear and attentiveness to the soundscape. For the past several weeks I’ve been re-reading what he wrote—and he wrote a lot—about sounds.
In his book, Nature, Ralph Waldo Emerson wrote that words were signs of natural facts, and that particular natural facts were symbols of particular spiritual facts (or truths); thus nature was the symbol of spirit. He famously pictured himself communing with Nature as if he had become a “transparent eye-ball,” the poet seeing and then naming the spiritual facts found in the natural ones.
Seeing led Thoreau to botany as well as poetry. Although, like Hawthorne, he distrusted the cold, observing eye of science when uncoupled from the heart, he invested much time and energy in botany, and believed that natural facts, if considered long enough, and steadily enough, would at length flower into truths in the light of day. Sight led Thoreau chiefly to observation, notation and measurement; sound led him to ecstasy and the sublime. For Thoreau, these two realms were complementary, not opposed. 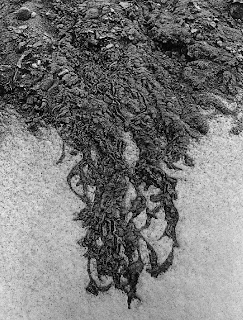 Thoreau was not only a daylight observer but also a frequent night-saunterer, listening intently to the natural world under moonlight. In his journals he reported his most intense experiences of the natural sublime, when his ear vibrated in sympathy to the language that “speaks without metaphor, which alone is copious and standard” (Walden, “Sounds”); that is, if I understand him correctly, sounds speak directly and universally. The sounding air in the telegraph wires in the Deep Cut near Walden Pond, along with the heaving of the frost in spring (photo, above and left, by Herbert W. Gleason), set in motion the sand bank foliage, as he called it, that became (in Walden) his most powerful metaphor of Nature’s renewal.
Yet he did not think of the air sounding the telegraph-harp as a metaphor “of” Nature; rather, it was Nature; it sang Nature. It sang Nature, vibrated his ear and put him into a sympathetic relation with Nature.
Hearing led Thoreau into those ecstatic moments of co-presence when he vibrated in tune, pardon the pun, with Nature. He did not spend his days teaching school, working in his family's business, or farming--although he was a keen observer of his neighbors and their farming habits. In the mornings he wrote; in the afternoons and evenings he walked, looked, listened, made notes. The little money he needed to live on, he earned as a surveyor. But it was sound that brought him into his most assured understandings of the natural world, and it was resonance that set him on his path to sustainability.
Posted by Jeff Todd Titon at 1:06 PM No comments: