A dairy farmer and a forester in Vermont

A field trip to what had until the previous year been a dairy farm, about ten miles from Sterling College, concluded the cultural sustainability symposium last August in Craftsbury Common, Vermont. I won't call attention to the farmer by naming him, but he was there to greet us and tell us something about unsustainability. The land had been in his family for seven generations, and for most of the past 75 years it had been a dairy farm. He had added a bit of acreage and expanded his herd to fifty during the last ten years, an investment on a scale meant to produce more income. The way he explained it, the farmers sold their milk to a buying co-op which had a monopoly in that part of the state (the Northeast Kingdom) and therefore set the wholesale price per gallon that they'd pay the farmers. For the past five years or so, his income from sales of milk did not meet the expenses of running the farm; and rather than continue to lose money, a year ago he decided to sell his herd. He kept his land, but he had taken a job working at the Trapp Family Singers resort hotel. His wife also had a job, and so they would be able to keep their land, he thought. He didn’t want it to pass out of the family.
Knowing a little about dairy farming in Maine, and also about the market for organic and upscale agricultural products in Maine and Vermont, among the tourists as well as the wealthier transplants, I asked him whether he had considered selling raw milk and bypassing the co-op. He said he had thought about it, but even though the laws about selling raw milk are not as strict in Vermont as they are in Maine, he didn’t think he could make a living that way either. As he explained the economics-driven unsustainability of his dairy enterprise, we looked out onto his pasture, and the land seemed better for agriculture than what I’m used to in my part of Maine. I supposed that a young couple, just starting out on that land, might have decided to grow organic vegetables here; but this was a dairy farmer in his 50s and it had been a dairy farm for three generations. He added that many other dairy farmers in that area were coming to the same conclusion, and that his kind of dairy farming, which was relatively small scale, was no longer sustainable in a state that is known as much for milk as maple syrup. 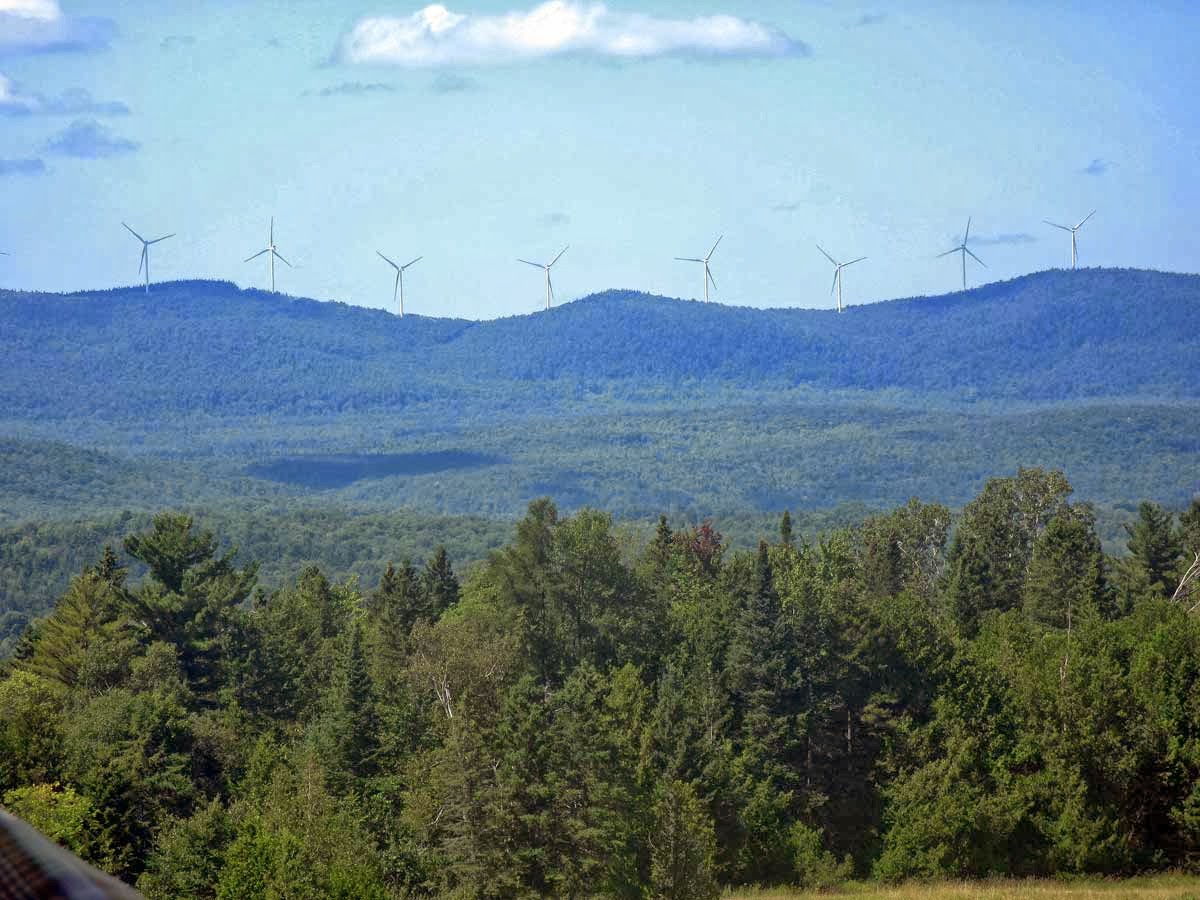 As he told his story and answered our questions, we could look out from the top of his hillside farm to the ridge to the north, where wind turbines were slowly turning, killing birds and bats as they generated electricity—yet apparently not for the local area, but rather to a Canadian power company that owned the turbines. I pondered the paradox of renewable, sustainable nearby energy going out of state in the service of Canadian corporate capitalism, while the same economic forces had made dairy farming unsustainable here, at least on this scale and at the present time. And, of course, unsustainability extended to the culture of dairy farming as well.
After we heard the farmer’s story, we took a walk along his woods road, led by a local forester, who told us about his own life and how he grew up in the Adirondack Mountains in New York State, and how after a series of unsatisfying jobs he eventually decided that he needed to work in the woods, and so he became a forester of the sort who hires himself out as a consultant, sometimes to timber harvesters, sometimes to local landowners who want to be good stewards. He was more satisfied working with the landowners, he said. He spoke about his interest in Thoreau, who toward the end of his life had written about preserving the Walden woods. Thoreau wrote that every town ought to preserve some forest land and, indeed, many towns in New England eventually did so. When I began college teaching many years ago, we lived in Reading, Massachusetts, right next to the town forest, where I spent many hours walking and gathering—not nuts and berries, but thoughts and ideas.
The forester also mentioned some Europeans who had been interested in forest preservation during the late 18th and early 19th century. Thoreau himself was most familiar with the forest preserves in England that were managed as parks rather than set aside as wilderness. Thoreau would have contrasted these with wilderness such as he encountered in the most isolated parts of the Maine woods, where he took three trips in the mid-1800s with a Native American guide, Joe Polis, and wrote about his journeys. Thoreau, whose writing is usually classified as pastoral, that middle landscape between wilderness and civilization, placed the highest value on wildness—“in wildness is preservation of the world,” he wrote in his essay on “Walking.” And so we walked on through the farmer’s woods trail, a pastoral scene, learning from the forester about the trees and good forest management for the small landholder—thinning the stands, for example, and cutting paths, providing different habitats for all the creatures that dwell thereabouts; for the health of the forest, as culture, is in diversity.
Posted by Jeff Todd Titon at 10:08 PM No comments: