Natural Sounds in the National Parks

In an earlier blog entry I mentioned a collaboration with Scott McFarland, biologist at the Great Smoky National Park, who is in charge of their Natural Sounds project. Just yesterday, a long “cover story” by Erin Young was published in the Knoxville Mercury, featuring Scott’s work there. This summer, he has been setting out sound-monitoring digital recorders in several Park locations that will document the soundscapes continuously for thirty-day periods (after which time the batteries must be changed). The recordings will not only measure human-caused (anthropogenic) sounds, such as those made by vehicles, construction, airplane flyovers, and so on, but also those geophonic sounds made by wind and water, and the biophonic sounds made by animals. These recordings will be compared with some made 10 years ago in the same locations, to determine the changing sounds and measure the various noise levels, all with a view to minimizing noise pollution to enhance the visitor experience as well as the acoustic habitat for the plants and animals.
I was on the phone with Scott a few days ago to obtain his permission for a different recording—the one made of our symposium on music, sound, and environment last April—to be placed in ETSU’s Sherrod Library, where it will be available for educational purposes and fair use. At that symposium, Scott and I, along with ecomusicologists Aaron Allen, Denise Von Glahn, Mark Pedelty, and Chad Hamill, spent an afternoon and evening in a public conversation which ranged widely over that theme. We were especially caught up with the alterations to the soundscape being caused by climate change, and other anthropomorphic changes to the sonic habitat. The symposium was well-attended—seats had to be added for an overflow crowd—with faculty and graduate students traveling from universities out of state, as well as in-state, to hear and then participate in the question-answer period at the end of each of the two sessions. 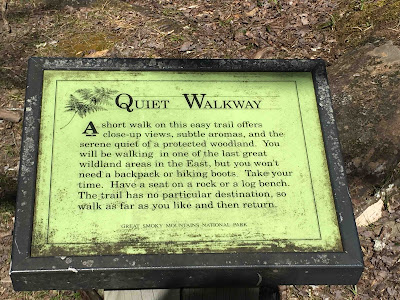 This year marks the hundredth-year anniversary of the US National Parks. With the attendant publicity, it is good to have some of it directed to the National Park Service's (NPS) Natural Sounds conservation project. And it is good to have people like Scott McFarland working on it. He was most generous with his time, visiting ETSU twice—once for this symposium, and another time for a presentation in a seminar I was teaching on ethnomusicology and the soundscape ecology of Appalachia—and hosting me when I visited the Great Smoky National Park. On my visits I noticed a few signs on the highway that read “Quiet Walkway,” pointing to trails leading into the woods. I decided to try one and learn how quiet it was. About a mile in, I found a few small streams, the water coursing over the rocks, making the usual pleasant geophony, while mockingbirds sang occasionally. Yet I could still hear the vehicular traffic and construction noise, and I’m sure that the mockingbirds could hear it as well. I’ve mentioned in earlier blog entries the acoustic niche hypothesis, that animal species communicate in particular sound niches so as to minimize interference from other sounds. As they move to different habitats and experience different sounds—including anthropogenic ones—they must adjust their niches to the changes in the soundscape. Experiments with birds and their songs appear to confirm this hypothesis. Evidently they can learn to do this within a generation or two—it isn’t a matter of evolution by natural selection.
Scott intends to head to coastal Maine with his fiancée in late September, and we hope to meet up near Acadia National Park, where he will spend some time. Perhaps a NPS Natural Sounds program could function there, as well. Acadia is well known for its partnerships with natural scientists who have been studying the changing animal and plant communities there; could sounds be next?
Posted by Jeff Todd Titon at 9:51 PM No comments: