The wind song of the Earth in ancient Chinese thought

Recently I took part in a roundtable on Music, Sound, and Nature in an Age of Environmental Degradation, at the New England Conservatory of Music, in Boston. I gave a short illustrated talk on the sound of climate change. I’d meant to offer the roundtable in the discussion that followed a quotation from the Tao, by Zhuangzi, which reveals the concept of earth song (as Thoreau called it), or the sounds of nature, as understood in early Chinese thought. I'd quoted this passage before, in a talk on "Thoreau and the Music of the Natural World" that was published in 2015 by Northeastern University. Thoreau was familiar with ancient Asian thought and may well have absorbed some of his ideas about the soundscape and the earth song from the Tao. Zhuangzi wrote, there, about the sounds of wind, the sounds of air, and of the breath; Thoreau was concerned with wind, echo, and the sounds of insects and animals, particularly birds, crickets, and amphibians. As some of the roundtable participants are following this blog, let me give the quotation here:

“Zi-Qi said, ‘. . . You may have heard the notes of Man, but have not heard those of Earth; you may have heard the notes of Earth, but have not heard those of Heaven.' Zi-You said, 'I venture to ask from you a description of all these.' The reply was, 'When the breath of the Great Mass [of nature] comes strongly, it is called Wind. Sometimes it does not come so; but when it does, then from a myriad apertures there issues its excited noise; —have you not heard it in a prolonged gale? Take the projecting bluff of a mountain forest; —in the great trees, a hundred spans round, the apertures and cavities are like the nostrils, or the mouth, or the ears; now square, now round like a cup or a mortar; here like a wet footprint, and there like a large puddle. (The sounds issuing from them are like) those of fretted water, of the arrowy whizz, of the stern command, of the inhaling of the breath, of the shout, of the gruff note, of the deep wail, of the sad and piping note. The first notes are slight, and those that follow deeper, but in harmony with them. Gentle winds produce a small response; violent winds a great one. When the fierce gusts have passed away, all the apertures are empty (and still); — have you not seen this in the bending and quivering of the branches and leaves?' Zi-You said, 'The notes of Earth then are simply those which come from its myriad apertures; and the notes of Man may just be compared to those which (are brought from the tubes of) bamboo; —allow me to ask about the notes of Heaven.' Zi-Qi replied, 'When (the wind) blows, (the sounds from) the myriad apertures are different, and (its cessation) makes them stop of themselves. Both of these things arise from (the wind and the apertures) themselves: —should there be any other agency that excites them?’" —Zhuangzi, The Sacred Books of China: The Texts of Taoism, trans. James Legge (Oxford: Clarendon Press, 1891), pp. 177-8. 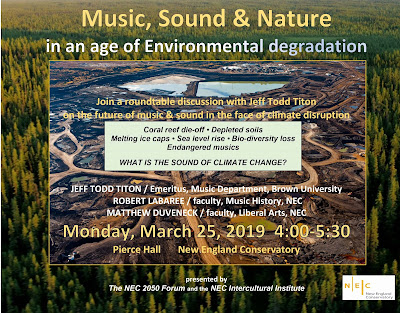 Posted by Jeff Todd Titon at 5:04 PM No comments: