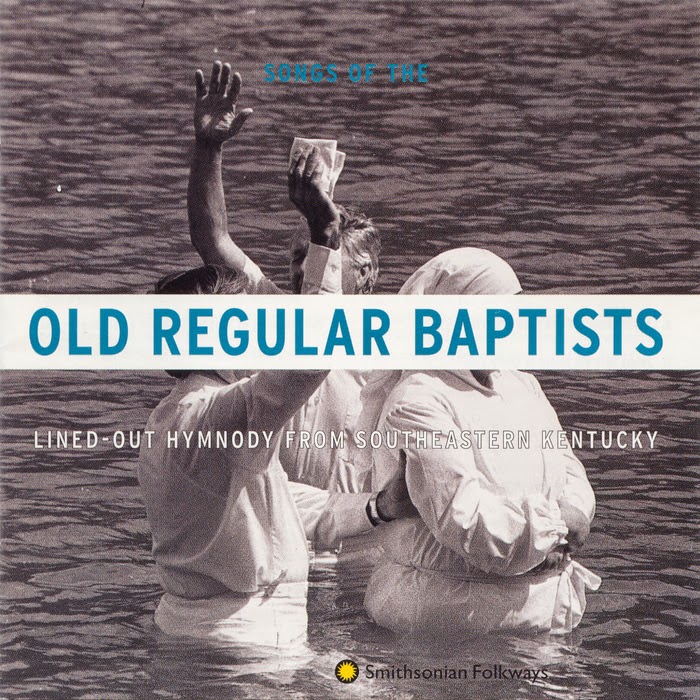 Two days ago, the Library of Congress announced its list of 25 recordings named this year as "American Treasures" to the National Recording Registry, recognized for their “cultural, historical, and/or aesthetic merit” in contributing to American society and its aural history. The announcement was broadcast by the Public Broadcasting System and National Public Radio as well as other national networks such as CBS. I was surprised but gratified to see that among those selected they chose a CD made from my field recordings of Old Regular Baptist singing. This is a major honor for the Old Regular Baptists, and it will help them in their efforts to maintain their musical tradition, which dates back to the 16th-century English parish church. Their lined-out hymnody represents the oldest living English-language oral tradition of religious music in the United States.
These sound recordings are part of a larger collection of my field recordings documenting Old Regular Baptist traditions: singing, praying, and preaching, along with interviews conducted with elders in the church. They span a period of from 1979 until now. I couldn’t have made them without the help of Berea College and three of its faculty members: Loyal Jones, John Wallhausser, and Bill Tallmadge. Other individuals and institutions that helped along the way were my employer, Brown University; Daniel Sheehy and Anthony Seeger of Smithsonian Folkways Records, which in 1997 released the CD that was selected for the Registry; and the National Endowment for the Arts, Folk and Traditional Arts Division, which supported the portion of this ongoing project that led to these recordings in 1992 and 1993. The recordings were the culmination of a self-documentation project grant from the NEA that I got for the Old Regular Baptists. It enabled them to record endangered songs from their elders, some too ill to attend church any more. I taught them how to use the recording equipment purchased on the grant, and accompanied them on their first recording trips to elders’ homes. Later, I returned to make the high quality sound recordings that would become that CD. Folkways released a second CD in 2003 from recordings I made in 2002. Elwood and Kathy Cornett, Jim and Dosh Fields, Don and Shirley Pratt, Ivan Amburgey, Mackenzie Ison, Ruth Frazier, Bob Banks, and Squire and Claudette Watts are among the Old Regular Baptists I must thank for their participation, along with many others too numerous to mention but whose names are on the albums as song leaders and speakers who related what the sound of the singing means to them.
I looked at the list of recordings selected for the National Registry since these honors began in 2002. Only about a half dozen folklorists and ethnomusicologists’ field recordings have been chosen in the dozen years of the program’s existence. I was surprised at how few there are. My recordings now join those of Frances Densmore, Franz Boas and George Herzog, David McAllester, and Alan Lomax. Boas, the most important American anthropologist of his day, began ethnographic documentation of music in the 1880s, accompanied by the polymath Carl Stumpf, who was instrumental in establishing comparative musicology in Germany.
Frances Densmore’s recordings were made early in the 20th century for the Bureau of American Ethnology. I remember seeing volume after BAE volume of her transcriptions in the University of Minnesota library, when I was a graduate student in Alan Kagan’s ethnomusicology seminars. Alan gave us an assignment to transcribe in musical notation one of Densmore’s field recordings of Native American music. He did not identify it by name until after we completed our transcriptions. I can still remember the title that Densmore wrote down for it: “Song to a Little Yellow Wasp.” I may even have my transcription in a file cabinet somewhere. Herzog, of course, was recognized as the leading US comparative musicologist from about 1930 until the early 1950s; he had assisted von Hornbostel at the Berlin Phonogramm-Archiv and after emigrating he received his doctorate from Boas in 1928. Dave McAllester was one of the four founders of the Society for Ethnomusicology. He taught at Wesleyan University, collaborated with me on a book, and became a friend. After he retired, we kept in touch and I visited him in his new house in the Berkshires, where he had also built a wigwam and meditated inside it at times. I thought he would live forever, but he died in 2006.
Alan Lomax is, of course, well known as both a folklorist and ethnomusicologist. I got acquainted with him in the mid-1970s when, as a young assistant professor, I asked if I could hear his Cantometrics training tapes. He invited me to New York and after I spent some time with him, I brought back on the train to Boston a carton of a dozen reel-to-reel tapes. Not only did I listen to them, but so did my students; and that began a collegial relationship that lasted until he died in 2002.
It feels good to have my field recordings join theirs, but I know that there are many deserving documentary collections besides these, made by thousands of folklorists and anthropologists and ethnomusicologists ever since J. Walter Fewkes recorded Passamaquoddy singing in Maine 130 years ago. Fewkes' earliest ethnographic sound recordings also are honored on the National Recording Registry, and copies are still being circulated among Passamaquoddy today. But even more important, they are still being sung.

Posted by Jeff Todd Titon at 6:01 PM No comments: