In my last entry I suggested that anyone who wanted to become an ethnomusicologist should realize that the usual path to this profession, through graduate school and the Ph.D. degree leading to a career as a professor in a college or university, was harder now that it was a few decades ago. The doctoral programs are graduating more ethnomusicologists than there are professorships available for them. Some graduates seek careers elsewhere, in museums, arts organizations, as journalists, and so on, while others remain on board the academic vessel, in 2nd class cabins as adjunct (i.e., part-time) professors for low pay and few, if any, benefits such as subsidies toward health care, retirement, etc. I’ve written earlier about the trend among presidents and boards of trustees to run colleges and universities as corporate businesses, generating profits in certain areas such as fund-raising, so as to support other areas and compete for students, faculty, attractive facilities and, of course, administrators capable of generating income. The difficulties arising from running colleges as corporations stem ultimately from the divergence between business values and educational values. Whereas business values competition and efficiency, education values collaboration and the free play of ideas, which is inherently inefficient. Education is far more process-oriented, whereas business values emphasize results.
If the current assault on the tenure system in higher education succeeds, then the prospect for aspiring college and university teachers takes a further turn for the worse, while US higher education's sustainability is further threatened. Now, security of the position and tenure’s guarantee that a professor’s teaching and research must be free from political interference is in jeopardy. Ten days ago, the news media carried stories on Wisconsin Gov. Scott Walker’s attempts to do away with tenure at the state colleges and universities. Walker proposes to eliminate tenure and also some faculty decision-making authority regarding curriculum, research, and staffing. The idea behind it, say Walker and his Republican supporters, is to enable university administrators to “be more like a business and nimble in how they govern,” according to the US News & World Report. 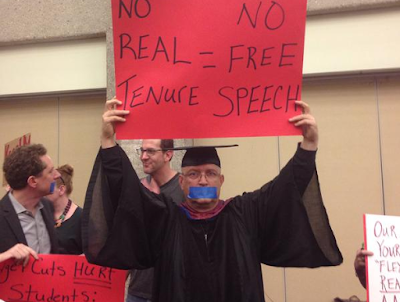 This change would enable administrators to hire faculty to teach this year’s fashionable subjects, and fire those whose offerings were no longer popular, as if math and history and physics and literature and engineering and music were marketplace products subject to the law of supply and demand. Competition in the educational marketplace, as in the business world generally, must be a good thing, they reason, as the best products will out-compete the others. The Wisconsin Board of Regents, most appointed by Gov. Walker, just recently approved many of his proposals, despite overwhelming opposition from faculty and students at Wisconsin colleges and universities.
And if this change occurs in one state, Wisconsin, pressure will mount for others to take similar action in order to compete. The end of the tenure system and faculty authority concerning curricula, research, and staffing means the end of academic freedom—the rights of free speech granted to faculty—that enabled the growth of knowledge and its expression at the university without threat of faculty being fired for exercising that right. Professors without tenure could under this new regime be fired, and students expelled, for expressing minority views on such topics as climate change, labor unions, foreign policy, racial profiling, or the roundness of the earth. Although the First Amendment guarantees the right of free speech, it doesn’t guarantee the right not to be fired from a job as a professor unless that right is accompanied by the academic freedom that has been guaranteed in the US by tenure for at least a century.
These efforts can be viewed within the larger trend toward turning the colleges and universities from collegially organized and governed institutions, where tenured professors were responsible to their colleagues and to the profession, into corporations organized and governed hierarchically, where the privileges of freedom of inquiry no longer operate. Of course, it isn’t only professors who suffer under these conditions. Teaching, research, knowledge and its application suffers as well under a regime of fear, as does public discourse. Professors fled Nazi Germany and Soviet countries in the last century—if they could get away—on account of political interference; academic freedom guaranteed in the US was, for them especially, an expression of the principles of freedom on which the US was founded. It is vital that not only professors and students but also the public at large vigorously oppose Gov. Walker’s efforts to politicize higher education.

Posted by Jeff Todd Titon at 10:02 PM No comments: