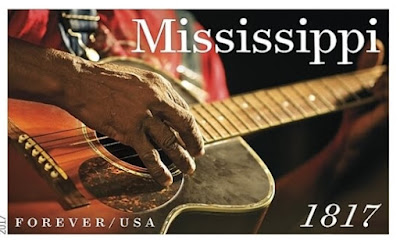 The United States has just issued a commemorative stamp in its series honoring the statehood anniversaries of each state of the union. This time, the state is Mississippi, and on the stamp is a painting of an acoustic guitar being played by a person with a brown hand and fingers. At the upper right are the letters Mississippi; at the lower right the number 1817 (the year Mississippi became a state), and at the lower left the word “FOREVER” followed by USA. It is the 200th anniversary of statehood, and it’s striking that the image chosen to represent the state is that of an African American playing blues on guitar. (The painting was made from a 2009 photograph by Lou Bopp of blues singer and guitarist Jimmy “Duck” Holmes, from the town of Bentonia, the same town of legendary blues singer/guitarist Skip James whose 1920s recordings are among the most riveting early blues performances. Well-known to blues aficionados for seven decades, James' recordings entered the public sphere in the 2001 film Ghost World, where they were the center of attraction for the young heroine’s fascination with a record collector.)
This wasn't the first commemorative to honor a Mississippi blues musician; in 1994 a 29-cent stamp was issued with an ugly painting of Robert Johnson's head that borders on caricature. Johnson had been the subject of blues revivalists' fascination in the 1960s, and again in the 1990s after the Blues Brothers film rekindled an interest in the genre. Columbia Records once again reissued Johnson's recordings, this time on CD rather than LP (the originals had been on 78s), and it seemed as if a US stamp with Johnson's image announced blues' mainstream cultural significance. The name "Mississippi" didn't appear on the stamp, which seemed more a coup for the blues and for Columbia Records, than for the state represented by Johnson's music.
But now, 23 years later, various things about this state's official commemorative stamp are notable. Blues, as I’ve written before on this blog, is a poster child for music and sustainability, because despite predictions for more than a hundred years of its impending demise, blues managed to survive. The “FOREVER” in this stamp takes on a double meaning: not only the stamp but also the blues is viable, so it's implied, forever. With this stamp, blues reverses 180 degrees, from impending death to eternal life. Certainly, in the 1960s when I was a guitarist participant in the blues revival of that time, and a part of the blues music culture, I wouldn’t have predicted anything like this. Not that I thought the death of blues was imminent, but its immortality on an official seal of the United States would have been inconceivable. Not only that, but in some ways it'd have been unwelcome.
It would have been unwelcome for record collectors, and for blues revivalists like me, because for us blues had become, in the 1960s, an alternative music, just as the protest songs of Woody Guthrie, Bob Dylan, Joan Baez, Pete Seeger, and Peter, Paul, and Mary had; and just as old-time string band music had become. Blues then was positioned, in the revival, not just outside of but in opposition to the music, and the values, of official, mainstream culture. Blues on a US stamp would have been viewed as an attempt to co-opt it and buy it off.
A few other things about this stamp are troublesome. Although I named the musician in my first paragraph, nowhere is his name indicated on the stamp. African-American erasure, once again. Indeed, blues itself isn't mentioned on the stamp; genre is under erasure just as is the artist's name. Identifying the state of Mississippi with a blues guitarist is appropriate because since the early 1990s the state's tourism department has promoted blues to visitors, realizing that the blues draws music fans who'll spend money in-state when they come to festivals, museums, gravesites, juke joints, record stores, and in other places associated with blues, not to mention money spent for food, lodging, gifts, and other things. 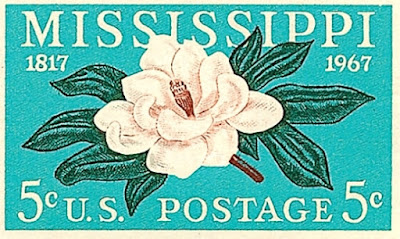 Fifty years ago, to celebrate the Mississippi sesquicentennial, the US issued another commemorative stamp. This was during the decade of the 1960s blues revival, and also the decade of the Civil Rights Movement, Mississippi being one of the most racially violent states. Ironically, perhaps, the 1967 Mississippi commemorative stamp then portrayed a Southern white magnolia, the state flower, worn by many a southern belle, representing beauty, purity, dignity and gracious living.

Posted by Jeff Todd Titon at 10:01 PM No comments: 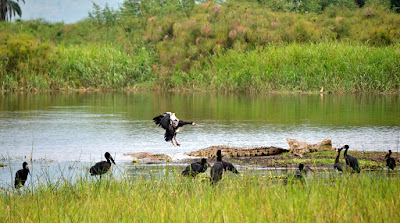 The history of applied ethnomusicology in the US goes back at least to the New Deal era, when ethnomusicologists were (comparative) musicologists and when Charles Seeger, the first president of the American Musicological Society, argued on behalf of an applied musicology that would be put to practical use in a democratic republic, for the benefit of society as a whole, rather than in service to high culture only. It was also an era of conservation, with the Civilian Conservation Corps, with agricultural conservation efforts underway in the Farm Security Administration, and the Works Progress Administration undertaking cultural conservation by collecting and encouraging popular and folk arts and crafts. The invaluable recordings by folklorists such as Alan Lomax for the Library of Congress were part of this effort.
The history of applied ecology goes back at least to the World War I era. The story will be a familiar one to anyone who’s followed the history of applied ethnomusicology. The professional society of ecologists, the Ecological Association of America (ESA), began in 1915, as an offshoot of the American Association for the Advancement of Science. It was founded to help unify a science that consisted of plant ecology, animal ecology, and so forth—a series of specialties without a general ecological theory. The ESA hoped to stimulate research and to serve as a place where scientists could share information. One of the ESA’s standing committees was devoted to another goal, using ecological research to advance environmental conservation. This "Committee on the Preservation of Natural Conditions" was led by the ESA’s first president, Victor Shelford (1877-1968), from 1917 to 1938. The next year, 1939, saw the publication of the most important work in general ecology in the first half of the 20th century, Bio-Ecology, co-authored by Shelford and Frederic E. Clements. The book advanced Shelford’s ideas of the biome and ecological succession, which he had introduced as early as 1912. Clements, of course, is known for his idea that ecological succession led to a climax community in a state of dynamic equilibrium.
Shelford’s credentials as an eminent research scientist were beyond dispute, but when at the end of Roosevelt’s last presidential term he tried to steer the ESA into establishing a new organization, one devoted to conservation, the ESA balked. Its officers decided that as a scientific society they must avoid becoming a political advocacy group, which they feared would happen if they sponsored the conservation organization that Shelford wanted. Going further, they abolished the Committee on the Preservation of Natural Conditions that Shelford had led for its first 21 years. Upset, Shelford left his professorship at the University of Illinois, and in 1946 founded the new organization himself, the Ecologists Union, aligning nature conservation with the goal of preserving entire ecosystems. That organization is known today as The Nature Conservancy.
It would be interesting to know whether the ESA’s unwillingness to endorse applied ecology during the immediate post-World War II period was part of the general climate of distrust for social engineering that derailed applied ethnomusicology for several decades, a distrust fueled by the social and scientific experiments and the war on academic freedom in Nazi Germany and Communist Russia. Universities might offer protection from persecution if academics could establish that science was beyond politics. But applied ecology would not be derailed for nearly so long as applied ethnomusicology. Eugene P. Odum (1913-2002), son of the sociologist and folklorist Howard W. Odum (1884-1954), and a student of Shelford in the 1930s, in 1953 wrote the integrative textbook Fundamentals of Ecology, which laid the foundation of ecological science on the ecosystem, a foundation that would remain for at least three decades.
The idea of the ecosystem was not original with Odum--it had been defined as a unit of study by Arthur Tansley in 1935, and tested by G. Evelyn Hutchinson. In the Fundamentals Odum explained ecosystems in the then-novel terms of cybernetic systems theory, in which higher levels of organization have structures and functions as a whole—emergent properties—that can’t be predicted by analyzing their component parts. Yet in that book and increasingly so in its successive editions, Odum also advocated an applied ecology in which scientists would work as consultants in policy matters. He himself did so, in matters of nuclear power (“atoms for peace”) and in opposing pesticides. During the environmental movement of the 1960s and 1970s, Odum promoted the idea that ecology was an integrative discipline (much like an ecosystem itself) that served as a bridge between science and society. He always maintained the distinction between ecological science and environmental activism, and lamented that the distinction had blurred as the environmental movement gathered momentum: environmentalists were being labeled as ecologists even though they had no formal training in ecology. Yet he felt that it was most appropriate for ecologists to take a stand for the environment, and for ecological research to ground the environmental movement by providing a scientific basis for sound policies.
Posted by Jeff Todd Titon at 11:39 PM No comments: