Whole Terrain and the Sound of Climate Change 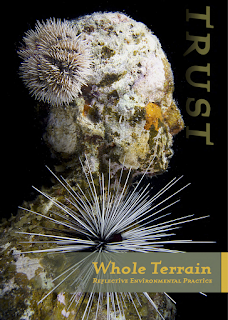 Whole Terrain, a journal of reflective environmental practice, last month published an author interview in which I discussed my essay, “The Sound of Climate Change.”  The essay may be read on my academia.edu page. The author interview may be read on the Whole Terrain website.
I’ve written in an earlier blog entry about how the essay was generated from a question by musicologist Denise Von Glahn. She and Aaron Allen and Mark Pedelty and I were chatting just before the Ecomusicologies conference in September, 2014. We were talking about our upcoming event in the spring of 2015 at the University of Minnesota, on the topic of sustainability and sound. “What is the sound of climate change?” she asked, and immediately we knew we had a theme for the Minnesota event, ultimately titled “Music and Climate Change.”
Earlier in 2014, Cherice Bock, editor of Whole Terrain, had invited me to write an essay for their next issue. We discussed my writing on the threats to the environment of mountaintop removal in central Appalachia. I pointed out that blasting off the mountain tops dumps toxic chemicals into the streams that run down the mountain hollows. They poison everything in their path. People, animals, plants, ecosystems are damaged.
But a few weeks after I returned from the Ecomusicologies conference, a violent, early-season snowstorm compelled my attention. As I stood outside on my porch taking it all in, I realized I was hearing the sounds of climate change in the great wind and the crashing of toppled spruce and apple trees. I felt I was eavesdropping on nature’s alarm calls. I knew then that I must write about this experience, instead of mountaintop removal, for Whole Terrain. By the end of 2014 I’d finished my essay on the sound of climate change and sent it off to Cherice. In 2015 I spoke on the same subject in Minneapolis. That issue of Whole Terrain was published in the spring of 2016. The following summer Cherice interviewed me, transcribed the interview, and produced the short, edited version that was published on their site in April, 2017.
I told Cherice in the interview, “. . . I heard the sound of climate change for myself in this . . . storm, and something compelled me to write about that topic for you instead. Of course, I’d read about climate change. I was very much interested in it. But it’s one thing to give assent to it as a threat or an idea, and it’s another thing to experience it for oneself. I heard it . . . [and] I could no longer walk out in the woods and be in nature the way I had been . . . I felt like . . . the land had been raped. These were very powerful feelings. I wondered how the other animals who lived on that land experienced it. I wanted to write about this. When you experience it for yourself, finding language that might be adequate to express your feelings is difficult but important to do. . . . Telling my personal story of loss also required telling a larger story of sound and climate change. . . We learn to trust our senses, attuned to our habitat, indoors and out. When familiar sounds leave, we become anxious. . . .”
I was struck once again by the way personal experience compelled me to write about sustainability. A 2004 invitation to play neighborly music at the Common Ground Fair, a celebration of sustainable living, started me thinking about music and sustainability in the first place. Ten years of writing, mostly theory, about music, sound, and sustainability followed, with an environmental turn in 2011. I was prepared to hear the sound of climate change in the violent storm of 2014, compelled to write about it, and to theorize a sound ecology with a new urgency.

Posted by Jeff Todd Titon at 10:40 AM No comments: