Post-Truth, Ethnography, and Religion in Appalachia 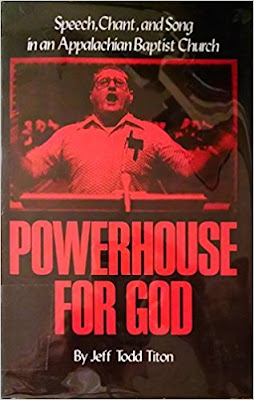 What’s happened to the ethnographic study of religion in Appalachia? In the last two decades of the 20th century it was a controversial, almost a hot topic within Appalachian Studies; in this century it’s cooled way down. At the 2016 Appalachian Studies Association conference, there wasn’t a single paper delivered on the subject, whereas in 1990 a special plenary session was devoted to a book that had recently been published on Appalachian religion, namely Powerhouse for God: Speech, Chant, and Song in an Appalachian Baptist Church (University of Texas Press, 1988). Perhaps the reissue of this book, forthcoming next year from the University of Tennessee Press, in a second edition with a new Afterword, will encourage more ethnographic research into this rich area of expressive culture.

Most of us who did this research in the last century have either grown old, lost interest, moved over to other subjects, or decided not to write much if anything about it any longer—or all of the above. The most prolific writer among us, Howard Dorgan, passed away. Why the current lull? It may be due to changing conditions within the academic world, or changes in ethnographic research and writing, or both. Typically, ethnographic research takes a long time. As opposed to survey work, which covers a broad area quickly (and sometimes superficially), ethnographic documentation means in-depth study of a single community for a year or more, though not necessarily a continuous year. Good (that is, accurate) ethnographic documentation requires meticulous attention to detail. Whereas religious beliefs and practices of indigenous peoples have always been an important topic for social and cultural anthropologists, the study of religion in the developed world, even among marginal groups, never attracted as much attention, nor did it carry much academic prestige. In today’s difficult job market, where hiring, promotion, and tenure often turn on research that makes a strong contribution to theory, and on topics that have broader than specialist appeal, the ethnographic study of religion in Appalachia has a hard time meeting either criterion. At the same time, ethnography itself has changed from an endeavor that attempted objectivity to one that recognizes the difficulties, if not the impossibility, of an objective approach. Religion is an especially difficult subject for ethnographers. Some religious practitioners feel that its essence is beyond the reach of science to begin with. Others make truth claims that ethnographers need to respond to, either by saying they are true, that they are false, or that it is best to set aside the truth or falsity of those claims and concentrate instead on describing the claims themselves, and the way they are practiced and experienced by the individuals and the social group that holds them. Documentation, once thought to be unbiased, no longer rests on so strong a scientific foundation; and the scientific study of religion was challenged even before ethnography itself was. Both its authority and its worth is questioned, and as a result it has become less appealing for this reason as well.


Recently, though, the dangers of living in a post-truth society, in which a fact is whatever one claims to be a fact, have become plain. In a review in the current issue of the Times Literary Supplement (TLS), Sam Leith reminds us that the Oxford Dictionaries declared “post-truth” the 2016 word of the year, defining it as “relating to or denoting circumstances in which objective facts are less influential in shaping public opinion than appeals to emotion and personal belief.” Post-truth leads to deception, including self-deception, which leads to misjudgment and ill fortune. This is true for populations and societies, as well as individuals and social groups. Ethnography’s claim to evidence-based solidity, if not complete accuracy, ought to become more attractive to those academics, and others, who resist the assault on settled opinion in matters of law, ethics, or, to take an example closer to the theme of this blog, climate change and sustainability. Possibly for that reason ethnographic research in general, and into religion specifically, will begin to gain more practitioners.
Posted by Jeff Todd Titon at 1:40 PM No comments: