Music in a Changing Climate

I've been remiss in failing to post a description of the "music in a changing climate" event at the University of Minnesota last April. What I contributed on "The Sounds of Climate Change" is an ongoing project, and it will be good to get some of those ideas out here now, as this research blog is meant to do.
Sixty years ago, in Northrup Auditorium, at the University of Minnesota, the Minneapolis Symphony Orchestra regularly performed the standard concert repertoire under the baton of composer Antal Dorati. Last April, the audience there was treated to more contemporary sounds, including a composition by Daniel Crawford and recordings of the songs of hermit thrushes. “Music in a Changing Climate” was the name of the event, and it featured talks by three ecomusicologists, as well as Crawford himself performing “A Song of Our Warming Planet.” For this 2013 composition, Crawford worked with data from the Goddard Institute of Space Studies on warming global temperatures from 1880 to the present. It has been featured in Slate and the New York Times, and has even been tweeted by Al Gore.
In the same year Crawford composed “A Song of Our Warming Planet,” I recorded the songs of hermit thrushes in the spruce forest outside my home on an island off the Maine coast. I began my talk for the Northrup audience on “The Sounds of Climate Change” with these recordings, later informing the audience that, on account of global warming, within a generation no one on that island would any longer hear those birdsongs in our forest.
According to Aaron Allen, one of the founders of the movement, and one of the speakers at the event in Minnesota’s Northrup Auditorium last April, ecomusicology is the formal name for a new field that is attracting musicians, composers, scholars and scientists interested in music, sound, nature, culture, and the environment. His definition of ecomusicology in the new Grove Dictionary of American Music is the standard reference at present, while presses are competing to publish books on the subject. Current Directions in Ecomusicology, edited by Aaron Allen and Kevin Dawe, will be out from Routledge later this year, and the Oxford Handbook of Ecomusicology, edited by Sabine Feisst, is in preparation. Already the subject of three major conferences, ecomusicology includes a great many topics, music and climate change among them. Musicologists who are interested in doing ecomusicology research write about composers and compositions that represent and involve the environment, and they pay attention to contemporary musicians and composers who raise consciousness about environmental degradation, global warming, and the like. At Northrup Auditorium, musicologist Denise von Glahn spoke about a composition that evoked the atmosphere of Mount Everest, composer Libby Larsen’s “Up Where the Air Gets Thin.” With climate change and the melting of the polar ice caps, the summit of Mount Everest is also experiencing great changes, and as a result the mini-industry of tourism surrounding the mountain today, along with its symbolism as a once-unconquerable force of nature, is also undergoing change. A performance of Larsen’s piece was also part of the “Music in a Changing Climate” program.
Today, with an increasing number of ethnomusicologists, ecologists, and scholars in sound studies gathering under the banner of ecomusicology, the subject is broadening to include soundscape ecology, indigenous people’s ideas about music, sound and nature, and the sounds of the built environment. Included in the presentations at the most recent ecomusicology conference was a plant scientist’s presentation on her research about how plants use sound to communicate with insects and with other plants, and a documentary film on Greenpeace’s attempts to get guitar manufacturers to use more sustainable forest wood in the manufacture of their instruments. As many people know, Brazilian rosewood, used to make the sides and backs of the most expensive guitars, is now an endangered species, protected against export by the government of Brazil, while pernambuco, from which the best violin bows are constructed, is also an endangered wood. For that reason, and others, ecomusicologists are increasingly concerned about music and sustainability.
After I began my talk on the sounds of climate change with the recordings of bird songs that will vanish from their accustomed places as a result of global warming, I told the audience how last year I heard the sound of climate change. An unusual early November storm was shaking the Maine coast: fast-falling, heavy wet snow with winds of 40 knots and the ground wet and loose from the October rains. I was out on my porch in the middle of the snowstorm, taking it all in. The big branches of the tall, slender spruce trees were waving back and forth in the gale, needles piling up with wet snow, looking like so many Shivas moving their arms about. Suddenly I heard a loud crack, and knew at once it was a spruce trunk snapping in two. I saw it go, a big one, at the edge of a field a hundred yards away, crashing down across the path into the woods. That day thousands of trees would break and topple in the storm, on the island where I live, and it would take five days before the power would be restored and five months before the damage was cleared out and cleaned up. In the presence of nature then I experienced a solemn beauty, awe and terror: the sound of climate change. 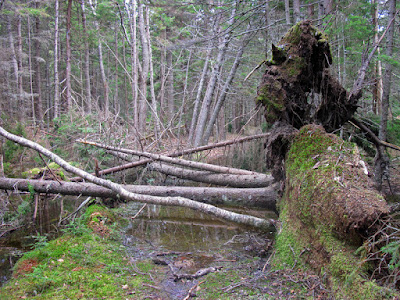 Or at least I thought I’d experienced it. Was this really the sound of climate change, or instead a poetic indulgence in the pathetic fallacy, the idea that somehow the natural and human world express the same feelings, albeit in different ways? Scientists tell us that most animals communicate in sound with members of their own species. But behavioral ecologists also point out that one species gains knowledge from listening to sounds made by other species, sounds that may not be meant for the eavesdroppers—as they call them—at all, but which they nevertheless put to use. Alarm calls that warn of predators alert all species within hearing range. Perhaps, then, when I heard the horrific storm, and listened to the spruce trees cracking and toppling, I was eavesdropping on nature’s alarm call, portending climate change for any and all who heard it.
The signs of climate change are all around us; the role of humankind in accelerating it is obvious to all but those who deny it on account of ignorance or a narrow and short-sighted self-interest. As the Paris climate change conference approaches at the end of November, we may hope that the delegates too are hearing nature’s alarm calls loud enough so that at last they will commit the inhabitants of the earth to doing something about it.
Posted by Jeff Todd Titon at 1:44 PM

Jeff Todd Titon
Emeritus professor of ethnomusicology at Brown University; Fellow of the American Folklore Society; part-time resident of Maine. Many of my scholarly essays may be found at https://brown.academia.edu/JeffToddTiton