Listening and Sustainability in the Atomic Age

Recently the Bulletin of the Atomic Scientists moved its “doomsday clock” indicating the imminent danger of nuclear war to 2 minutes before midnight, the closest it has been since 1953 when Russia tested its first hydrogen bomb. Although climate change, cyber warfare, and increasing stockpiles of chemical and biological weapons were cited as factors, the main reason for advancing the doomsday clock was the danger of a nuclear confrontation between North Korea and the United States. The potential for catastrophe places the idea of musical and cultural sustainability in a planetary environmental context.
A couple of weeks ago I had the pleasure of reading an essay about sounds in an earlier time during our atomic age, specifically the sounds of Civil Defense during the 1950s. These alarm sounds including not only air-raid sirens but also public service radio broadcasts warning people to "stay alert, stay alive," as well as school exercises such as "duck and cover" and shelter drills. Civil defense issued LP records with one side dramatizing the effects of an atomic bomb dropped on a US city, and the other side instructing listeners to pay attention to the air-raid sirens and descend into their well-stocked fallout shelters so they would be able to survive. According to Civil Defense propaganda, civilization could be sustainable in the face of a nuclear war if only people listened closely, heeded the alarms, and sheltered themselves properly. Some cities and military bases would be bombed into oblivion, but the propaganda maintained that in other parts of the US people would be able to withstand the attack if they stayed in their shelters long enough to avoid the radiation fallout.
Lyrics from two popular songs from the period were analyzed: "Sh-boom" and "Thirteen Women (and Only One Man in Town)." The chorus to "Sh-boom" went, "Sh-boom, sh-boom, life could be a dream, sh-boom, sh-boom, if you would take me up to paradise up above, sh-boom, sh-boom, life could be a dream sweetheart." And "Thirteen Women" imagined a nuclear war in which one man survived, with thirteen women survivors fawning over him. According to the author, “Sh-boom” was intended to mimic the sound of an atom bomb, while the singer envisioned a life in heaven afterward; both song lyrics were said to reflect the atomic age in which people might survive a nuclear war if they heeded the sounds of the radio and the sirens and bells, while schoolchildren followed the sounds warning them to duck and cover or descend to the bowels of their school buildings. These sounds were the “alerts that triggered responses,” similar to the Pavlovian reactions to our smartphone notifications today; and they were the sonic texts that the author read to construct a history of the listening culture of the atomic age. 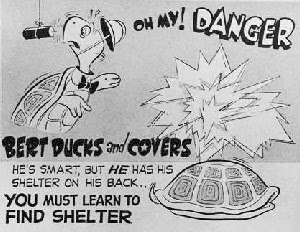 Yet the author wrote about this listening culture without listening to the people who lived through it. Many did not respond to those sounds as the Civil Defense intended. I am old enough to have lived through this period as a boy. I recall the duck-and-cover exercises we went through in elementary school. We used to repeat the instructions with our own variation: “Now children, go under your desks and bend over, put your head between your legs and kiss your ass goodbye.” In junior high, after the proper alarm sounds signaled, we practiced shelter drills, lining up in size order from shortest to tallest, and moving in a very orderly way down the stairs to the building’s sub-basement, where we stood silently for a few minutes until the all-clear alarm went off and we walked back up to our classrooms. I recall the air-raid siren tests that went off every Friday at noon without fail.
When I was a boy, my family listened regularly to the radio. Although I recall the Civil Defense pamphlets, and the upside down triangle signs on radio dials and elsewhere, I can’t recall hearing the public service announcements for civil defense, and “alert and alive” never registered with me. At about eleven or twelve years of age I was gifted with a pocket sized transistor radio, and I listened to a wide variety of radio stations and yet I can’t recall those announcements. I must have heard them, but for some reason they didn’t make the kind of an impression for me to recall what was in them. Duck-and-cover, shelter drills, air-raid sirens, and other exercises signaled by alarm sounds quickly became routine. We children made fun of them. Imagine a deliberate march in size order to a bare, underground hallway where we would wait for the building to collapse on top of us in any attack. 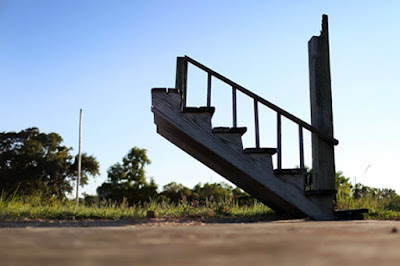 Perhaps our ironic stance was an existential reaction, although at ten years old we knew nothing of Sartre and Camus. That I don’t recall the civil defense radio spots also suggests that at some deeper level I must have shut off my sense of alarm in the face of the un-faceable. I did not participate in the “listening culture” of the atomic age as it was intended for me to do. Neither did my friends. My parents might have encouraged me to participate, but I don’t recall they initiated any conversation about an atomic attack. In other words, I don’t know how they felt about Civil Defense and whether they listened carefully or had turned themselves off. Certainly, we never had a fallout shelter of our own nor made any preparations as a family for a nuclear attack.
The ways in which these alarms affected the lifeworlds of those of us who lived through the period were left out of this writer’s essay. Older people, children, men, women, wealthy people and those not so wealthy, people living in cities that would be sure targets and others living in remote areas, all participated to some degree in this Civil Defense listening culture, while most people listened to radios. If I had been asked, I could have said that the sounds did not have their desired effect on me and my cohort. We could not take them seriously. To survive, if we were forced to confront them, we had to take the sounds of alarm bells, sirens, CD radio spots, and song lyrics ironically.
Although I well recall “Sh-boom” from my pre-teen years, any sound and symbolism of the blast and a life afterward in Paradise was completely lost on my friends and me, who simply enjoyed the clever sounds without thinking much about the meaning of the lyrics. If we’d been asked, we’d have said that “Sh-boom” was about romance, not about a bomb and its aftermath. And “Thirteen Women” didn’t register on us because it wasn’t a hit song. (The flip side, “Rock Around the Clock,” registered very loudly. And schools regularly made up cheers for sporting events, imitating the song and adapting it.) Rock and roll lyrics weren’t meant to be taken seriously, anyway. Those of us old enough to recall the Steve Allen show on television will remember that this talented comedian regularly spoke rock and roll lyrics out loud as if they were profound poems, while the audience in the studio and at home laughed at them. For some of us, it was the first time we actually heard them as words, rather than as something different (sung sounds). This is an important point, I believe, for anyone who wants to understand the meanings of popular song lyrics from this era as they were experienced. Interpreting song lyrics as if they were poems overlooks the different meanings we took from them, not as verbal messages but as rhythmic sound clusters. Indeed, this was the only way we could experience the doo-wop layers of the songs.
Tom Lehrer, an important singer-songwriter in the folk music revival of the 1950s, laced his songs with satire and irony. To lyrics like Lehrer’s, some older teenagers (and adults, too) listened as if they were popular poems. One of them, explicitly about a nuclear holocaust, was “We Will All Go Together When We Go.” Among its increasingly outrageous rhymes are these: “Universal bereavement / an inspiring achievement” and “With complete participation / in the grand incineration” and “Just sing out a ‘Te Deum’ / when you see that I.C.B.M” and “When the air becomes uranious / and we all go simultaneous.” Irony would be a useful hypothesis for anyone interested in understanding the listening cultures of this atomic period from the point of view of the listeners. In our contemporary era of bigger nuclear buttons, and missiles and bombs, Lehrer’s songs and the desperate humor they carried are just as relevant, while music and sustainability takes on a different relation: singing for humans and for sustaining the environment by singing for peace.