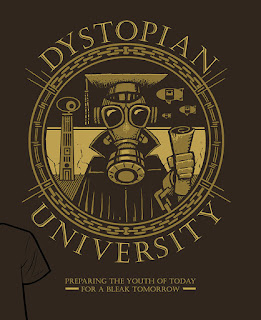 A recent essay in the New York Review of Books, by Shakespeare scholar Joseph Shapiro, connects a dark interpretation of Hamlet with the dystopian climate in academia today. A young scholar just published a book whose thesis is that all the older literary critics were wrong about Hamlet: he didn’t hesitate to kill Cluadius because he had an Oedipus complex, nor because he was a coward, nor because he was depressed. He didn't oppose murder on religious grounds. Rather, he was the embodiment of a Renaissance humanism that was collapsing because it failed to reckon with the predatory force of a heartless world. Hamlet is a weak idealist.
This kind of claim, coupled with the ascendance of dystopian visions among millennials (such as the author of the Hamlet study), made me wonder whether sustainability itself isn’t the product of a weak idealism in the face of a worldwide struggle for existence, to use the Darwinian metaphor. In other words, why think that it might be possible to sustain a sound commons, music, people and cultures, the environment of planet Earth? And yet, dark interpretations are just that: dark interpretations. Dark money and the dark internet are new, but dark, apocalyptic visions have been around at least since the Book of Revelation. Dark interpretations of sound as an instrument of power and control dominate contemporary scholarship on sound studies. To those writers, a sound commons appears unrealistic and utopian in the face of a crisis that is deeper than environmental. I agree that it is deeper than environmental. Since 2015, in my lectures and writings I have contended that sustainability is, ultimately, a crisis in ontology (being) and epistemology (knowing).
But since these dystopian visions are, after all, projections of the future, it’s possible to ask what it is in the present that gives rise to them. It’s not difficult to understand why they’re ascendant now, given the current political climate—one that threatens the institutions positioned to do something about sustaining music, culture, the environment, energy, food and agriculture, and so on. Shapiro, a professor of English at Columbia, muses on the possibility that the dark future for humanities scholars is reflected in this writer’s new theory about Hamlet. He wonders if the writer is a scholar who, “Hamlet-like, expected, when their turn came, to inherit an academic kingdom”—that is, to become a tenured professor of literature at a college or university. But cutbacks in funding, coupled with those institutions’ turn to a corporate model of economic efficiency, have resulted in dismal prospects in this century for professors in the humanities—that is, many fewer tenured jobs, and many more bad (part time, underpaid) ones. Embittered, the scholar doesn’t blame the politicians or the political climate. Instead, the scholar blames the failure on the liberal arts themselves, which equips educators to think, and ponder, and contemplate, and cogitate, on political philosophy; but not to act on it, to fight back against the forces allied against it—and this failure, it seems, grows out of the very idealism built into the humanities themselves: not only that persons could be educated into wisdom, but that the world could be educated into justice.
Of course, although Hamlet himself failed, Renaissance humanism did not fail. Yoking Hamlet to a collapse of humanism makes little sense, if history is consulted. Humanism’s educational values broadened and deepened, giving way to an even greater reliance in the 18th century on reason, then a period in which reason was coupled with feeling, followed in the later 19th century by the rise of science and the modern liberal arts university. To be sure, dissenting voices of modernism and post-modernism undermined humanist ideals, while powerful contemporary voices rise in a post-human assault on the humanities, sometimes in the name of a deeper ecology, but also (as in the case at hand) arising from a darker, dystopian vision of the world. Nor is this pessimism new: Hobbes and Malthus had it during the so-called Age of Reason, while the optimism fueled by the new science and technological advances of the late 19th century was also the time when the pessimism of social Darwinism implanted the struggle for existence into human nature itself.
As it happens, this scholar who threw up the dark vision of Hamlet seems already to have inherited the kingdom. He's a “research scholar with the rank of professor,” at an Ivy-league university. It's not clear whether he holds a "continuing appointment" (tenure); but his research and writing accomplishments are significant, and his perch in the profession of English does not appear in doubt. His interpretation of Hamlet doesn’t arise from a personal failure to thrive within the diminishing world of scholarship and universities. The dystopian vision seems to be a contemporary cultural phenomenon, especially among millennials; and anyone who advocates for sustainability needs to reckon with it.